The new century proved a false dawn. The previous century had been predominantly Britain’s century and the city had taken full advantage. Manchester in the eyes of the world meant cotton and in cotton its position seemed unassailable. But by the end of World War II it was obvious that the glory days of the trade had been left behind, international forces over which Manchester had no control were at play. In 1968 the depleted Royal Exchange – the symbolic centre of the cotton industry closed. In the 1960s too the Manchester Guardian fled to London. 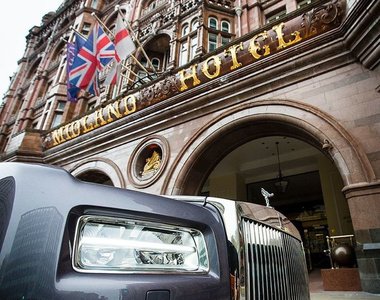 There were still notable advances though. In the early years of the century Ernest Rutherford, working at the University, began an examination into the nature of the atom which would lead to its first splitting, in 1918 – the laboratory is still radioactive. One of the members of his team was Hans Geiger, the designer of the famous Geiger Counter. In 1904, Rolls met Royce in the Midland Hotel to form the company of the same name and in 1911 Ford opened its first European plant at Trafford Park. In aviation in 1908, A.V. Roe made the first British sustained flight and 11 years later, two Manchester men – Alcock and Brown – were the first to fly across the Atlantic. Several decades on in 1948, the first stored computer programme was run at the University. Three years earlier the city had hosted the Pan-African Conference in October 1945. 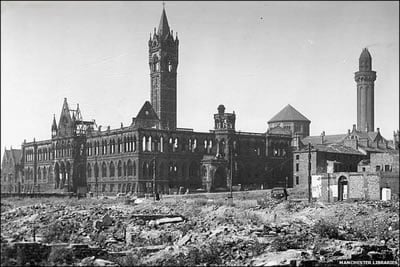 In common with much of Europe, Manchester suffered terrible losses to its young men in the First World War and it would suffer heavy bombing in the Second World War.  In the 1930s the city’s ambition with regard to air travel was rewarded when Manchester Airport finally got off the ground.  This would prove to be an invaluable asset to the city. At the same time, Manchester Corporation embarked on massive housing programmes. The most famous of these was the Wythenshawe development.

The worst nights of the blitz were 22/23 December 1940, when over 700 people were killed and 2,500 injured.  Over 100,000 homes in the area were damaged, as well as the Cathedral, the Royal Exchange and the Free Trade Hall.  At one point, the fire, fanned by the wind, was so fierce that buildings were demolished to stop its spread.

The last 50 years of the twentieth century have proved significant in terms of popular culture but been marked by steep manufacturing decline. Manchester was built by industry, particularly the cotton and manufacturing industries. The former has entirely disappeared, whilst the latter is reduced. The financial and legal sectors have remained as strong as ever, complemented by the growth in electronics and high-tech industries with engineering still important. But today the city can no longer be pigeonholed as industrial, it has a similar mixed economy – with an increasing emphasis on services – to most major Western centres. There is a sadness involved with this for there was honour in Manchester’s reputation as a giant of manufacturing.

Manchester’s achievement in pop and rock music is renowned. The contribution to British broadcasting has been significant, particularly from the time in 1956 when the independent television company Granada arrived. In 1960 a script by Tony Warren was accepted and Coronation Street was born. This is now the oldest continuously running TV soap opera in the world. Other successes have included Brideshead Revisited, Prime Suspect, Cracker and Cold Feet. Less than a mile down the same road lies the BBC’s main North of England Studios where documentaries and light entertainment programmes such as A Question of Sport are produced. The acclaimed dram Clocking Off is a BBC production too, whilst other award-winning series based in the City have included Queer as Folk and Bob and Rose.

Manchester sport is explored more fully in other areas of this site. One event should be mentioned here though. This was the Munich disaster of 6 February 1958, when the ‘plane carrying United’s skilful young team, nick-named ‘the Busby Babes’, crashed on take off in Munich following a European Cup tie. 23 people, including nine of the young team, died.

In terms of higher education, the city has doubled and then tripled in size. There are now more 84,000 students in the institutions of the University of Manchester, the Metropolitan University, the Institute of Science and Technology and Salford University.

The last five decades have also witnessed large scale immigration. Manchester is now the host city for peoples from every continent with significant Asian, Black and East European communities alongside centuries old Irish and Jewish communities. These have become an integral and vital part of the modern city.

What many visitors today notice is the confidence, which you can see in our things to do in Manchester guide. This change of mood away from post-industrial depression was stimulated by the abortive bids for the Olympics in the ‘90s. To compete with other world cities the parochial attitude of the previous decades of industrial decline was thrown aside in favour of thinking big. Manchester, once more began to conceive on a grand scale: it began to live up to the expansionist liberal tradition that had made it one of the global players.

Then came the massive June 1996 IRA bomb – the largest ever exploded in anger in mainland Britain. But instead of halting the upbeat mood swing the bomb had the effect of reinforcing it. 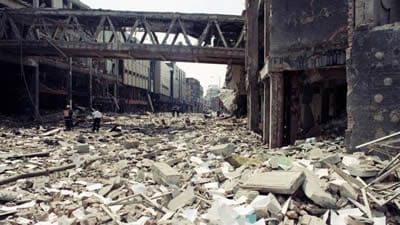 A walk across the city centre today reveals a city more open and accessible and enlivened with new buildings and squares yet with easy access to countryside and outer districts. The central area has become more and more popular reversing a hundred years of English suburban sensibility: office and shop rents have risen, thousands of people have moved in with one sheer glass apartment block selling triplexes at £1.75m. Unemployment in the travel to work area of Manchester is the lowest it has been for decades at around 3%.

Significantly the profile of the city has risen internationally. One company recently reported: ‘Manchester has been at the cutting edge of innovation over the last years. It is a model for a city with a great past … combining traditional and revolutionary architecture … giving its citizens a fine and stimulating environment for work and leisure.’

Meanwhile, Manchester’s twins Salford and Trafford conceived and delivered The Lowry and The Imperial War Museum North. A billion pounds worth of investment has arrived or is arriving in the city. Quality in most areas, not least in design, is again of paramount importance although it will be interesting to see if locals take Tadao Ando’s Piccadilly Gardens scheme to heart. 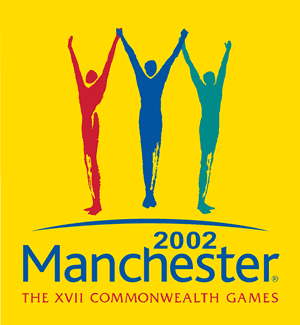 The Commonwealth Games cemented the good feeling in July and August 2002 with all authorities agreeing it was the best ever. For the event the city was in full party mood with the whole population galvanised in support. The event was watched by a billion worldwide and attracted a million visitors to the city.

Not everything in the garden is rosy. The wealth in central Manchester and the south of the city masks the desperate conditions of the poor in the north and east. There are a number of projects – such as New East Manchester – which are attempting to alleviate the situation, inspired by the model ‘90s redevelopment immediately to the south west of the city centre in Hulme. These provide glimmers of hope but all agencies agree that it won’t be easy to restore confidence in these blighted areas.

29 March 2003 marked 150 years of formal recognition as a city. There has been no treaty signed at Manchester, no key battle fought, no art movement announced, yet the city led the world into a new age in the nineteenth century. As Manchester moves forward with a fresh confidence it is as well to remember this – and all the attendant problems and prizes that brought. 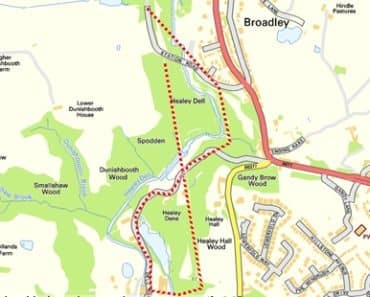 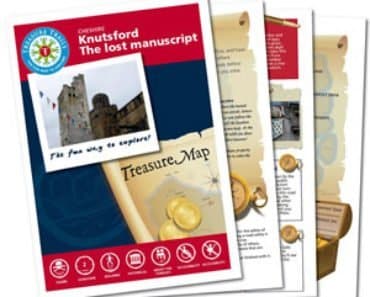 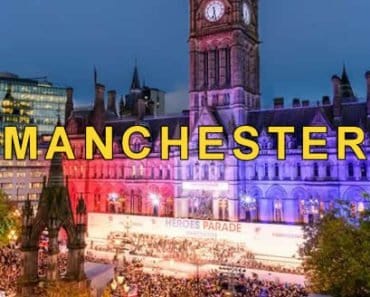 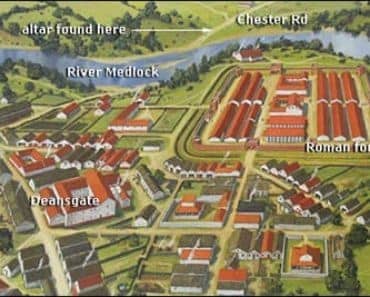