It can be easy to forget there’s much more to the UK than just England. To really get to know the UK you have to visit to the Celtic realms of Wales and Scotland.  Trust us, you will thank us very quickly. 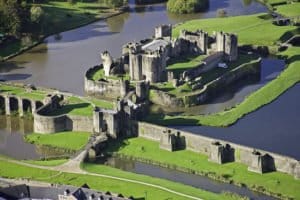 Capital of the principality of Wales, Cardiff grew up as a port for the shipping of iron and coal from nearby Welsh valleys. Now it’s cast off its grim history as a rough seaport to become a green and stately city with pedestrian shopping quadrants, statued squares and a large and well-preserved castle.

Cardiff also features a strong sporting and cultural presence. Sporting events such as the national sport of Rugby Union are played at the new Millennium Stadium. The Welsh National Opera now performs at the Wales Millennium Centre, Wales’ palace to arts and culture.

Cardiff International Airport is about 12 miles from the city. It connects with various destinations in the UK and continental Europe.

Direct trains connect Cardiff with London, Manchester, Birmingham and Nottingham and others as do national coach services.

The city has an effective bus system and the city’s flatness make it perfect for cycling. There are also two kinds of taxis – the black and white prowl the streets looking for fares and other colours which have to be booked.

Check on the internet for the range, location and cost of Cardiff hotels. 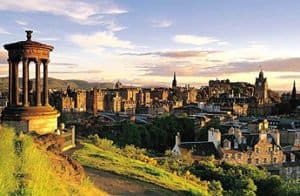 Edinburgh’s rich and storied history has endowed Edinburgh with a beguiling medley of medieval, Gothic Georgian and contemporary styles overlaid with an uniquely Scottish ambiance.

Capital of Scotland since 1437, Edinburgh is crowned with its castle. But for all its history it’s a lively place with museums and galleries, night-life,great restaurants and shops, and an scintillating programme of events throughout the year.

Transport around Edinburgh can be summed up in the two words buses and bicycles.

Edinburgh has a temperate climate despite its northern location. The weather is generally mild though subject to winds gushing in from the south-west. Summers in Edinburgh are blessed with long days and it’s often sunny though rain can sweep in out of the blue. Winters are chilly with short dark days.

Check on the internet for the range, location and cost of Edinburgh hotels.

Over the last 20 years, Scotland’s largest city has cast off its roughhouse reputation to become a revitalised centre for commerce, tourism, and culture with excellent parks, museums and shopping. Now the city offers everything from curling to opera and ballet, and from football to art appreciation and symphonies.

Glasgow International Airport is 10 miles west of the city and Glasgow Prestwick Airport is 30 miles to the southwest.

Glasgow has a fine public transport system with a subway, trains and buses, and taxis are abundant.

The weather in Glasgow is milder than the rest of Scotland owing to its position. It gets the Gulf Stream current up the Clyde Estuary. Plus, the humidity resulting from its location in the Clyde Valley helps to warm the area.

Check on the internet for the range, location and cost of Glasgow hotels